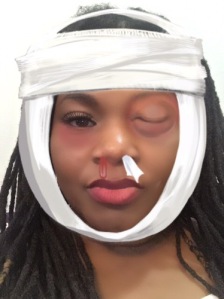 I am uncomfortable in Texas. Right now, it feels like a foreign land. I spent over 10 years here in my formative high school and college years. Those were not all great memories and since I haven’t lived here in over a decade, my only point of reference is media.

As a kid, when my mom told me we were moving to Texas, I burst into tears. The only thing I knew about Texas – or thought I knew based on the evening news my grandaddy watched – was that it was hot (over 100 degrees!) and there was a drought. Mom dismissed my fears, telling me that we would be living in a city, not a desert. That didn’t make me feel better.

We drove to Houston in our blue Chevy Nova. As soon as we crossed the Texas border, this old white man in a cowboy hat driving a looooong brown car with steerhorns (which I’d later call longhorns) on the hood, floated past us. I cried again.

Once we settled in, it was difficult being away from my extended family for the first time. I was used to going to the same school as family and spending time after school with my grandmother, the defacto babysitter for me and my cousins. Suddenly losing my whole clan at once was devastating.

It was also difficult because I was an only.

Do you know about onlies? The only girl or the only Asian or the only smart one, the only band geek etc.

I was the only black girl.

I was the only fat girl.

I was the only one who was not from Texas.

I was the only one with a “funny” accent.

And I had no idea why I was the only kid to whom both kids and adults kept referring to as the New York baseball team. I was a Cubs fan.

Needless to say, being the only of so many onlies, was pretty miserable.

Fast forward to today, I’ve been living in New York for 15 years and every time I hear something about Texas, it’s something bad: police brutality, gun love, fairy tale textbooks, abstinence-only sex education, the massive need to control women at all costs, made up problems like the war against Christmas, reverse discrimation and #alllivesmatter.

Refer to article or social media post comments or a Google search on the thoughts of people in Texas, and unless you are male, white, Christian and straight and cisgendered, it seems that you will not be liked (or safe) in Texas.

This knowingness, the constant awareness makes me overly anxious about people’s reaction to me. I am SO aware of my race here. In fact, if I encounter a white person, I assume they hate me unless an expression or word indicates otherwise.

I cant be racist. I have a white dog.

The fact that I feel so much like an outsider (and unsafe), is not just attributable to my race, but also my lifestyle differences and beliefs.

I don’t believe in pretty much everything Texans stand for (guns, hate of Mexico, Christianity, homophobia, marriage in your 20s, wearing soccer shorts or yoga pants in nice restaurants).

There’s a fear surrounding me, a stiffness, a closed-offness. It makes me identify more people as an enemy. The only explanation being my perception about what people here believe. A perception that’s wholly from media and not actual relationships!!

I’m working to break through these thought patterns because I don’t like how it feels to be paranoid and to make so many negative assumptions.

I’m conscious. Woke. So here’s some recent situations that I felt self-conscious about, and my new interpretation designed to pull me out of my formerly comment-fueled paranoia.

I took an early morning boot camp class in the park with an all-female group. The leader began the class with prayer.

My initial thoughts: Later echoed by a friend in NY when I told him – is this even legal?

Why wasn’t I fairly warned that this was a religion-based workout. Is there a new father God burpee? Is this my cross to bear?

My self-forced awakening: Is this really so different from a class I take in New York called Inten-Sati? It begins with inspirational talk and meditation. IntenSati’s empowering affirmations and body, mind and spirit connection is not really that different in meaning from the prayer-leader’s talk. I could just assume that the prayer was given with the same goal as the IntenSati pre-workout message.

Plus, I rationalized that if I needed a rest I could just say I was praying.

While driving — everything in Dallas requires a 20-minute drive (even Chipotle!) — I came upon a 4-way stop.

The car in front of me had the right of way. Yet he motioned for the other driver to go ahead.

Then the other driver motioned for him to go. After they do this TWO more times, I zoomed around both of them and continued on my way.

They broke into crazy honking and one even tried to give chase.

My initial thoughts:
They clearly weren’t in a hurry, so what could be the problem? Is this not a safe place to be driving while black?

My self-enforced awakening thoughts: They think I’m an asshole.

In New York, on foot, or wheels (skateboards, bikes, or cars), we yield to who’s the fastest. Have to.

Have you ever merged into the Holland Tunnel? Eight lanes narrowing down to two that can actually enter the tunnel. There’s no, “You go ahead.” Somebody just goes for it.

Yea baby, survival of the fittest.

Get in where you fit in.

Neither was my honking at the woman who was taking her sweet time getting into her the car after the valet brought it around. Wait, you’re the one blocking traffic and have the nerve to get huffy and throw ME the angry look?

In NYC, if you take too long to cross the street, parallel park, get in and out of a cab or pretty much anything else, you are getting a honk (at least) and better not feel victimized. What makes you think your time is more valuable than mine?

Alas, efficiency and getting the fuck outta the way is not a value here. That explains the dirty looks (and gestures).

My first weekend here, my dad was hospitalized for pneumonia. A health care provider came in to run some tests. The man takes a glance at us, looks slightly surprised and then uncomfortable.

He announces to the room that he’s there to conduct a breathing activity. He concentrates on setting up his machine, ignoring me when I say hello.

My initial thoughts: He’s surprised that we’re black and doesn’t like black people.

I ask him to explain the test. His eyes light up and he begins to explain how it’s not a test, but a treatment. He tells us what will happen, how long it will take, how it will help with healing.

Afterwards, he awkwardly and intently goes back to his work and doesn’t speak to us further.

My self-enforced awakening thoughts: It has nothing to do with us, he’s just awkward. I was totally internalizing something that didn’t even exist.

Since I’m going to be here for a few months, I decided to check out the Dallas dating market. On the very first day on OKCupid, I get a message that states “Do you date white guys?”

If he doesn’t have enough confidence to present his offer without asking that upfront, I’m not interested.<Delete.>

It’s just how things are done here And they’re trying to work within that paradigm.

Really dude? Your concern is being white?

I guess it’s just how the dating market here works. People guess what may not be acceptable and then ask about it upfront. Which means that if I don’t answer, the white guy will assume that I didn’t reply because he’s white. Even though the real reason is that hat.

There’s a thousand reasons someone might not be interested in you. To assume it’s solely your race seems very self-limiting.

This is not a post-racial world, so it’s a real issue. But for it to be your opening statement just elevates it above all else. Which is really sad.

One Saturday night in NYC last year, I was on a date and thought maybe I was talking too much. He had just gotten that vacant look on his face. I ask what’s up and he says, “Did you realize that every couple in here has a black woman?

I looked around – I hadn’t noticed. A neighborhood sushi place on a random Saturday night had at least 10 couples, and all the women were black. I wondered if it was Take a Sistah Out Night or something.

It did make me realize that it was the first time that me and this guy had discussed race. He was acting a little too gleeful about being in on the trend that night and that kinda annoyed me. (Did he see that as validation of his choice or what?)

People try to force their beliefs on others. Fact. Many are afraid of otherness. It’s easy to be a keyboard killer and say all sorts of nasty things that you would never say directly to someone’s face. That combination makes it easy to see and fear extremes in people and places you’re not familiar with.

I think media exacerbates how different we are from one another. Humans, no matter the race, gender, class, religion, marital status or anything else, have more things in common than don’t.

And although I’m aware that the beliefs systems here differ from my own, I’d rather err on the side of assuming love instead of hate. Otherwise, I’d just become the fear-mongering bigot I despise.