I have a gay best friend, let’s call him Portland. I spend a lot of time with him. He knows all my favorite things. All my secrets. We go to happy hour together, dance and stay out all night, rent summer shares. We’re super close and super silly. We are family.

When dating, having a man who A – isn’t homophobic and 2 – won’t mind me spending so much time with a man is a must.

Thus, early on, there’s a Portland test. The last auditioner for role of man-in-my-life, let’s call him Santiago, passed the Portland test early. He didn’t turn up his nose everytime I had plans with Portland. In fact, he’d sometimes take me there and tell me to have a good time. He welcomed my Portland&Me stories and wanted to hear Portland’s latest relationship and work drama.
Sure he’d ask the requisite straight man stupid questions, like, had I ever seen Portland’s dick. Or had Portland ever been with a woman. But those questions quickly passed. 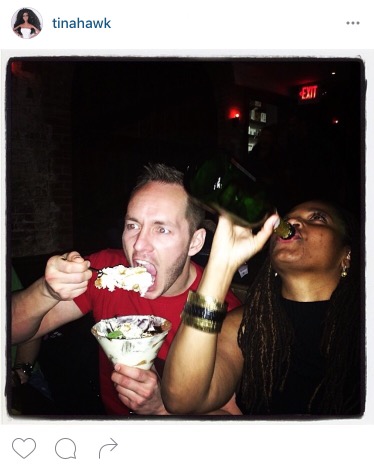 The only early drama was the one Sunday Santiago woke up in my bed, alone. Since I didn’t text where I was going, he discovered it by seeing this pic on Instagram.

Santiago and I got on with the business of having a relationship. And one Saturday night, we were on the couch and Santiago had just eaten too much Seamless Web-delivered pizza. Suddenly, it occurred to me that I hadn’t danced in more days than I could remember. And I was home on a Saturday night.

So I say to Santiago, accusingly, “You NEVER take me out anymore!” And he says, matter-of-factly, “That’s Portland’s job.”

Then I realized that I’d gotten exactly what I asked for.

Santiago loved that I had Portland to go to brunch with so he could sleep in. He wasn’t a margarita fan. He didn’t want to be squeezed into restaurants and bars in Hells Kitchen. He didn’t want to shop in large Manhattan department stores. And, let’s not even get started on Broadway shows.

So turns out, he was getting what he wanted. I was getting what I thought I wanted but not what I really wanted (what a riddle). I want a man that wants to leave the house after dark for something other than a pizza run.

That was a few years ago and now I have learned this hard lesson once again.

This time, it was my trip to Latin America, which turned out to just be a trip to Mexico.

When I quit my job several years ago, I envisioned the freedom to be anywhere in the world and do my job. To be on a conference call one minute and getting a Thai massage the next. To draft a presentation and then slip into a pool. A natural yin and yang.

From day one as a business owner, I longed for that freedom.

Initially I imagined my destination would be Thailand. It’s one of my favorite places. The people, food, massages — everything there is fabulous. And very affordable. In figuring out how I would service my clients while on the other side of the world, it became clear that the time zones would make my life challenging. I would be up all night to service my east coast clients and then up all day if I wanted to have any fun. I didn’t know what I’d do about my west coast clients.

Almost four years into my entrepreneurial journey, I planned my first work abroad trip. The timing was perfect because I’d just ended a relationship and had decided to rent out my apartment in Brooklyn and move to one in the city.

I put all my things in storage, save for two suitcases full of black clothes, and headed to  Latin America — same time zone and affordable. I’d been wanting to learn Spanish anyway. It would be nice and warm escape from New York City’s winter blues.

In the first leg of my journey, I discovered, floating in the pool is not so fun when you’re wondering if those edits were applied to the brochure.

Have you ever tried to see a laptop screen at the beach? Impossible.

When Skype works, it works, but when it doesn’t, phone communication back to the States is next to impossible.

When you’re not online all day, just catching up on emails takes a good three hours. Then you’ll need to work til way past midnight if you want to do some actual work.

Within 10 days of being in my temporary home, I discovered:

The lonliness surprised me the most. I’m a master of traveling alone and have grown to really enjoy it. Yet I’d never felt so lonely as I did during this trip. I put myself in the position to meet some new people by joining a co-working center and discovered that locals weren’t really in the market for new friends. They had pretty constant life routines. Those that didn’t, were largely Americans. I wasn’t in the market for a circle of expatriate friends. Spending all night speaking English, seemed to kind of defeat the purpose of this “adventure.”

It was hard to give up the dream though. I stubbornly held on. It was on my bucket list for years, I couldn’t just give up.

Frankly, I was extremely disappointed in myself. Have you ever spent time dreaming about something and then when you get it, it’s not as fabulous as you imagined? I thought back to some other things that I had dreamed of and they came true — various trips, living in NYC, giving a presentation to thousands of people, buying my first pair of Louboutins, becoming an aunt.

This didn’t feel anything like what I’d dreamed about for years. How did I become so different from that girl who wanted to trek around the world with absolutely nothing tying her down?

I missed New York – even down to that little old Asian lady down the street who doesn’t speak English. We nod and smile at each other every morning while I’m walking the dog and she’s walking her granddaughter to school. And in the evening, she’s strolling with her grandson to put him asleep and I’m walking the dog again.

This lady has even witnessed a fair number of my suitors and given the thumbs up or down and she walked by (she thumbs upped Santiago – I think she was swayed by the tie and BMW, or maybe his amazing hair.) Yet she and I don’t even know each other’s names.

If I miss the nameless, you know I also very much mention the named. The simple things like vanilla-flavored Chobani yogurt with a sprinkling of smoked almonds and half a banana… ENGLISH….non-roll-on deodorant…3-ply toilet paper and toilets that can handle it…indoor heating…

To admit that this trip didn’t make me happy was painful. I’m glad to have done something I set out to do, but not liking it has left me feeling confused and kinda lost.

What’s next for me? A picket fence? Cleaning on Saturday mornings? In bed before 1 AM? Becoming predictable and BASIC? A MINIVAN?

Frankly, I’m not sure what’s next. For now, I have to just own and acknowledge my feelings. YES, it wasn’t for me. But I do know that I still want to travel abroad several times a year, just first class, 5-star hotels and no more than 14 days travel.

And I’ll work from New York City, my home.