When I found myself behind an old man with a cane slowly making his way up the stairs at Brooklyn’s Barclays Center, I should have been suspicious about the section where I was seated. 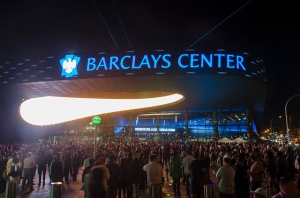 When I settled in my seat (1.5 hours after opening) and saw the three rows surrounding me were full while the rest of the arena was pretty much empty — people were either fashionably late or milling about in the packed hallways — I should have gotten a clue.

When I was the only one who knew the words to the songs the warmup DJ was spinning, I excused it thinking, people in suits probably don’t go hard in the paint or pop that. I’m sure you’re seeing the pattern, right? (Why are they in business suits?)

Then Jay-Z hit the stage and I jump to my feet — by myself. Yes, my section stayed seated and clapped politely while bobbing their heads. I looked around in confusion. Am I the only one with dirt on my shoulder? Isn’t anyone else wondering who’s gonna run this town tonight?  Doesn’t someone else intend to spread love the Brooklyn way?

Alas, the other sections in the place were rocking, just not mine. I felt a bit uncomfortable, but I’m not afraid to party alone.

Suddenly, security comes rushing over. Someone had reported that a man in a black hoodie in row 3 (my row) was smoking weed. It’s Brooklyn, so there’s no immediate assumption that the girl with dreadlocks is in the mix. But I’m still evil-eyeing the group wondering  who committed this ULTIMATE party foul (tattling)! People smoke weed at concerts. It’s just a reality. It might even be in the fine print on on the ticket printout.

Finally, it clicked. This went way beyond being in a lame section. It was the American Express Platinum “deal” that was the problem. Sure, it seemed great at the time: I got opening night, a great seat for less than $100 and a pre-sale period so I was all set before the tix even went on sale.

I thought about my girlfriend who didn’t decide quick enough whether she wanted to go (I know what I want and will leave you behind if you take too long or can’t get your paper together) and thought about how much she’d be laughing at the situation. It annoyed me and made me miss her at the same time.

Jay played “Empire State of Mind” (without Alicia’s presence, I might add),  and my section bristled with excitement. This song they knew. Before Alicia’s stand-in finished the emotional, “One hand in the air for the big city,” my sectionmates were gathering their things. And by the time the final note of the song was played (live band!), the section was empty — 30 minutes into the show. Apparently that’s the swan song for platinum purchasers (except this one).

After the section cleared, other people appeared, almost like magic. Before long, I wasn’t the only one sing-yelling or throwing the diamond up. I was surrounded by every age, race and hairstyle.

That’s Brooklyn — one group leaves and the next one is ready to take over. And I’m just along for the ride.